The City of Bristol has been fortunate to be the recipients of two grants from the Federal Emergency Management Agency (FEMA) in recent years. A Community Risk Assessment done in 2013 concluded that the Bristol Fire Department (BFD) is well equipped and trained to respond to the needs of the community. Especially with regard to the fire prevention program, the report noted that the City was succes sfully targeting commercial properties but stated that, “the BFD needs to target their public fire education efforts at high-risk populations and buildings within the City.” Residential fires occur most frequently in the dense, older sections of the City, in areas primarily filled with modest single-family and multi-family homes built to house workers for the many factories that were the economic drivers in early Bristol.

In December 2014, shortly after the Risk Assessment was delivered, there were two fire-related fatalities in a mixed-use occupancy house fire on Federal Hill. In that event, two people succumbed to smoke inhalation in two separate apartments over a first-floor business. One of the apartments did have detectors that were operational. The apartment where the fire originated was extensively damaged and therefore it’s hard to know if there were working detectors in that unit. The house was more than 110 years old. In January 2015, another fatality occurred in a condominium in the Forestville section of town.  The condominium owner, who died in that blaze, had removed the smoke alarms from his apartment because of the noise they made when he cooked. In May 2015, another apartment fire occurred in the City and the occupant succumbed to his injuries a month later. The smoke alarm in that apartment was not working at the time of the fire.
Fatal fire events such as these have a devastating impact on a community, as well as on the families, neighbors, and fire personnel involved in the rescue efforts. The BFD is determined to address the lack of smoke alarms in older homes and to ramp up their efforts to make sure there are functioning alarms in every home through an educational campaign and the Smoke Detector Distribution Program. 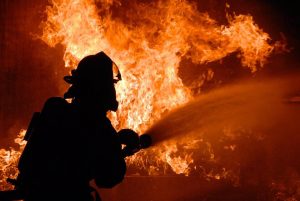 With a generous grant from FEMA, the City has 10-year lithium battery smoke detectors available for free to homeowners who request them. Fire personnel will install as many smoke detectors as are needed in the home, usually three. One of these may include a CO detector as well, if the home has an oil heating system. These units will be installed free of charge upon appointment with the BFD. Call 860-584-7964 ext. 4 between 10:00 a.m. and 2:00 to schedule an appointment. Fire personnel from the station closest to your address will arrange to visit your home at a time convenient to you. Fire prevention is the first priority of the Bristol Fire Department, and the best way to save lives is to have smoke alarms installed and working in every home. Call or visit the Bristol Fire Department’s Facebook Page https://www.facebook.com/bristolctfire/ or the City’s website www.ci.bristol.ct.us  to arrange for your appointment today!

Working for the City of Bristol, Connecticut as the Grants Administrator, Dawn Leger writes and administers grants that support various government programs through Bristol’s Development Authority.