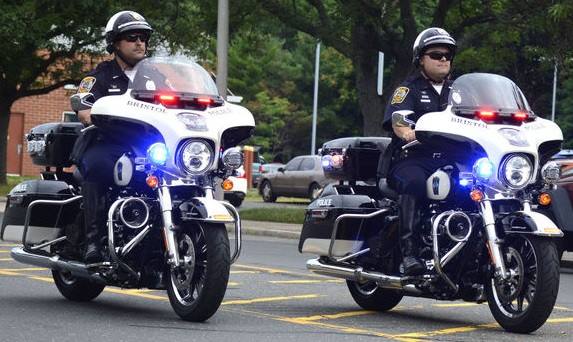 In 1877 a town meeting was held and it was decided to employ night watchmen, two men in the south village and one in the north village due to the increase in burglaries. Other groups employed during this period also included the Mutual Protective Association and The Society for the Prevention of Horse Thieving, which was a very serious crime. In 1893, the town voted to establish a formal police department and Howard G. Arms became the first Police Chief of Bristol.

Today, the City of Bristol Police Department is committed to protecting and serving the community with integrity and professionalism. Chief of Police, Brian Gould heads the department of 122 sworn officers and 26 civilian personnel which covers a jurisdiction of 26.5 square miles.

Patrol Division
The patrol division is the largest division within the police department and is headed by the patrol captain. Approximately 110 officers are supervised by the captain, including lieutenants, sergeants, patrol officers, and dispatchers. This division is fully staffed around the clock.

Upon graduating from the police academy, all officers begin their careers in the patrol division. The officers work an eight hour day, with four days on and two days off. They are assigned to one of nine squads that cover three shifts.

The patrol division is directly responsible for the day-to-day services provided to citizens within the 26.5 square miles of Bristol. The officers enforce all local ordinances and state laws involving motor vehicle violations and criminal offenses. The patrol division is the most visible to the public as they respond to a wide variety of complaints.

On average, the police department responds to over 60,000 calls for service each year. One of the most frequent calls for service is a medical emergency. All officers are trained as medical response technicians and carry oxygen, automatic external defibrillators, NARCAN and other medical supplies in their cruisers. Officers can be assigned to a cruiser, foot patrol, or bike. Special police units are also assigned to assist the patrol division. These may include the crime suppression unit, canine, emergency response team, motorcycle unit, and the serious traffic accident reconstruction team.

To aid officers in the field, all cruisers are equipped with mobile data terminals. This allows officers to conduct computer checks, communicate with dispatchers and complete their reports in the cruiser.

The men and women of the patrol division are the first line of defense in the fight against crime. Their professionalism and diligence helps to improve the quality of life in the City of Bristol.

K-9 Unit
Many police departments today have realized the value of police K-9 units and their ability to protect and assist officers. The Bristol Police Department has been fortunate enough to utilize this resource in protecting the community. Presently, they have three German shepherds named Bronn, Murphy and Hunter working in the Patrol Division. As canines are notorious for their sense of smell and the speed at which they can run, they are a valuable asset in locating criminals and evidence in any setting. Though the dogs are friendly, they have undergone rigorous training that has elevated them into highly efficient police officers. Should you meet one of our dogs and his handler on the street, please be sure to ask before approaching them.

Bike Patrol Unit
Another important unit is the Bike Patrol Unit. The primary purpose of Bicycle Patrol is to increase patrol coverage and to provide added safety to citizens in the downtown area, city parks, and shopping areas. The opportunity for citizens to approach and speak to officers is greatly enhanced by the bike patrol.

The most common areas patrolled are Rockwell Park and the downtown area. With the introduction of bike cops, criminal activity has been reduced. The bike patrol maintains a constant presence in the downtown area to enforce parking, patrol hot spots and assisting the public as needed.

The bike patrol usually starts in April. It runs throughout the summer and into the fall. October and November are the months that bring a close to the patrol season. Even though officers have cold weather gear, the slippery roadways make it a hazardous time of year for anyone to be out on a bicycle, police included.

Park Patrols
The City of Bristol has invested wisely in our parks. To support this initiative the Bristol Police Department has dedicated Officers to patrol our parks during the Summer months. During your visit to our parks you will see Bristol Police Officers patrolling our parks on foot, bikes and other motorized equipment. These Officers are encouraged to interact with our Community and are always approachable. In addition to enforcing park rules, regulations and ordinances, you may see them getting involved in a friendly pick-up game of some sort.

For more information about the Bristol Police Department, its divisions and units, how to submit a citizen compliment or a complaint, and for forms or permits, visit the department’s web page on the City of Bristol’s website.