Made in Bristol:Paving the Path for a Future in Manufacturing

College. For some high school seniors, reading that word induces extreme stress. Teenagers are faced with the monumental task of deciding their future. The same questions circle their minds until a decision is finally made. Which university should I attend? What should my major be? Can I afford this school? How do I know I’m making the right choice?

When Tyler Roalf was a senior at Bristol Eastern High School in 2015, his decision was a little bit different. He didn’t want to go to college.

“I didn’t really know what I wanted to do. Especially in school, everyone pushes so hard for you to go to college,” Tyler said.

His career path became clearer one night at the grocery store, nonetheless.

He said his mother ran into a friend, Kathy, whose husband, Ken Dayton, is a managing partner at Pa-Ted Spring Company LLC. Pa-Ted produces a wide variety of custom springs used by people every day, all over the world. It has clients internationally – in North America, Mexico, Europe, and Asia.

Tyler’s mother told Kathy that her son was interested in a manufacturing career. They exchanged phone numbers. Lo and behold, Tyler called Ken that evening inquiring about Pa-Ted.
Tyler began his four-year apprenticeship with Pa-Ted in the weeks following. He said he spent his Wednesday afternoons at Pa-Ted for an hour or two, while he was still juggling the course load of senior year.

“When I started with it, I didn’t really know where I was going to end up,” Tyler said. 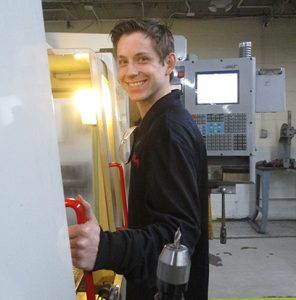 Tyler Roalf is happy with his manufacturing career choice and has become a ‘jack-of-all-trades’ at Pa-Ted Spring Company, LLC.

He took the unknown with stride. He began his apprenticeship completing simpler tasks as an operator. After graduating high school, he enrolled in Naugatuck Valley Community College’s seven-month program that teaches the fundamentals of being a machinist.

Tyler said choosing this life path over college was a no brainer. Not only will he not have any college debt, but learning is intertwined with making money. “It’s like getting a paycheck to learn,” he said.

Tyler has become a jack-of-all-trades at Pa-Ted, which has not gone unnoticed. “He’s really developed into an incredible troubleshooter. When we have equipment that goes down or has some sort of issue, he has become inevitably the go-to guy,” Ken Dayton said. Now, Tyler’s apprenticeship is winding down with less than one year to the finish line. He’s already thinking about what’s next. Tyler said he wants to continue at Pa-Ted and work his way up as a leader there.

“My future is definitely being a toolmaker. I have my heart set on continuing. There’s people that put in 50% effort and I just try to give it 100% all the time,” Tyler said.
Tyler’s family history comes full circle with his decision to practice tool making.

“Not only have I pursued it this long, I feel I have a talent for it. It runs in our family. My grandfather was a toolmaker for 50 years. It’s in the bloodlines,” Tyler said.

He paved his path, right here in Bristol. When asked why he wanted to stay local, Tyler did not hesitate with an answer. “My family has been here forever. Generations back have lived in Bristol. Bristol is all I know. Plus, I build things here now and over my time of living here, I don’t see myself living anywhere else.”

While Tyler certainly has a bright future, there’s only one problem; the manufacturing industry needs more students like Tyler. Ken Dayton said unfortunately many high school students are choosing college over a trade. “It’s kind of put us in a bad place that nobody is in the habit of having apprentices in training on a regular basis,” he stated.

Tyler said the lack of young people entering the trade presents more opportunities for him to land leadership roles. However, the lessened interest in trade career paths will eventually mean fewer experts to fix your plumbing, electricity, HVAC systems, and so forth.

Ken and Tyler both said one reason people shy away from a career particularly in manufacturing is due to an incorrect perception of what it’s truly like.

“It’s not this sweatshop covered in grease that it’s sometimes viewed as. There’s a lot of technology used. Everything we do is computerized,” Ken said. 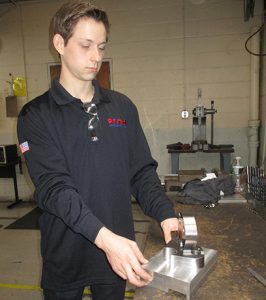 Opportunities for Growth: Tyler wants to continue to work at Pa-Ted and eventual work his way up as a leader.

Tyler, to the same tune, said, “People assume it’s a dirty job. That’s not the case in 21st Century manufacturing.”

Ken said he thinks he can change the perspective; he just needs to find people willing to have the initial conversation. “Give me any student that has aptitude and willingness, let him train with me for four years and by the fifth year he’s making more than the college graduate,” stated Ken.

For anyone questioning their future, whether it is in manufacturing, another trade, or the college route, Tyler offers some advice, “Put yourself out there and obviously don’t limit yourself to what people tell you to do. Every different person on this planet can tell you to do something different.”