Made in Bristol: A Career Change At Any Age Leads to Success

Bart Holcomb – Bristol’s own living proof that you can switch careers at any age, as long as you’re willing to learn.

Immediately after college, Bart began working as a mason. He said his father always encouraged a career in manufacturing, but at the time, masonry felt like a good fit.

Eventually, Bart’s career in masonry evolved into entrepreneurship as he started his own business, Holcomb Masonry. 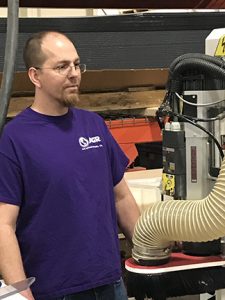 In terms of the next decade, Bart said, “My 10-year goal is to be able to walk in everyday and still be excited to come in.” He said he plans on staying in this field for the next 20 years and is confident he will continue learning something new, each day.

After about two decades of working as a mason, Bart said the intense labor took a toll on his body. “I loved it. It paid very well, but it just became hard,” Bart said.

Then, his father’s advice about a manufacturing career came to fruition. Even though he owned his business and had tenure as a mason, Bart decided it was time for a change.

That change led him to the Arthur G. Russell Company in Bristol. Now, Bart has been working as a machine assembly technician there for more than a year.

Although he started with almost no experience in manufacturing, Bart at least had one thing: grit. Even his manager, Steve Barber, can attest to that.

“He’s not afraid to do anything. That’s really important to us here because of the size company we are,” Barber said. “He has no problem doing whatever it takes.”

Although masonry and manufacturing may seem like night and day, Bart said the skills required for each industry intersect. Working in manufacturing, Bart said his day-to-day involves a lot of applied math.

“Masonry did require a good bit of math,” Bart said. “Even more so than that, I think what you can take from any previous job – time management is huge.”

Bart said transitioning from flexible hours (since he was his own boss) to a set second shift was an adjustment. However, he said the time management learned from creating his own hours is hugely applicable in any career.

“Working for yourself, if you don’t have initiative, you don’t make money,” Bart said.
That initiative will work to Bart’s advantage as he said he hopes to work his way up the ladder at Arthur G. Russell.

In terms of the next decade, Bart said, “My 10-year goal is to be able to walk in everyday and still be excited to come in.” He said he plans on staying in this field for the next 20 years and is confident he will continue learning something new, each day.

Jason Ensminger, Executive Vice President of The Arthur G Russell Company stated, “The Arthur G. Russell Company is an organization that needs talented people because that is what we sell: the talent of our people. The assembly machines we build are extremely complex and require thousands of hours to complete. I believe there may be many people in Bart’s situation. I am happy he made the decision to come to work at AGR and try something new. We have many extremely talented people with decades of experience that would be happy to teach new employees with little manufacturing experience how to build a complex assembly machine.”

For people who are considering a career jump, whether it’s in manufacturing or something else, Bart encouraged, “I would say hurry up and do it because time passes fast.”