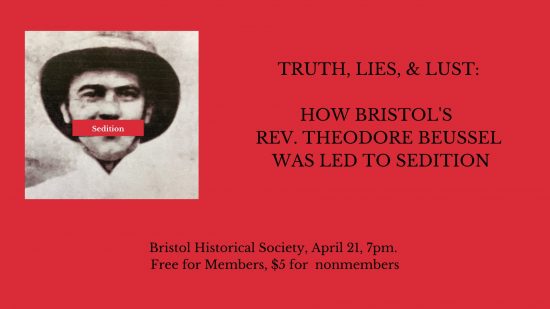 The date is May 27, 1918, and the United States is at war in Europe. As far as Bristol is concerned at that precise moment, there are over 1,000 Bristol boys serving, with 11 dead, 13 missing, and 16 wounded.
A little closer to home, the Red Sox lose to the White Sox 6-4 at Fenway Park. President Wilson urges a series of tax increases to raise war revenue. And about half a mile from the Bristol Historical Society at 157 Queen St. on the second floor of a boarding house, a party starts around 7 PM.
There are four people in attendance, William Sterling Kerr and his wife Marie C. Kerr from Maine. They are hosting the party. The others are twenty-four-year-old Leonore C. Murphy, a nurse from Boston, and Theodore Beussel, a Reverend at the German Lutheran Zion Church on Judd Street in Bristol.
The three-hour party is full of merriment as they play music, dance, eat, drink wine, and the men “toast the women they love.”
However, everything is not what it seems. Before nightfall of the following day, Theodore Beussel will be arrested by federal agents for making seditious utterances against the United States. He will never set foot in Bristol again.
Eventually, Reverend Beussel will be found guilty on three counts of sedition and sentenced to 30 years in prison. As a result, he will be removed from the church, lose his home, and his US citizenship will be revoked.
What did Reverend Theodore Beussel say in a room with only three other people, resulting in his American dream being
destroyed? Come to the Bristol Historical Society on April 21 at 7 PM to find out.
This presentation is free to members and $5 for nonmembers.

Your Phone
8608888540
Your Email Address
marilyngsimmons@gmail.com